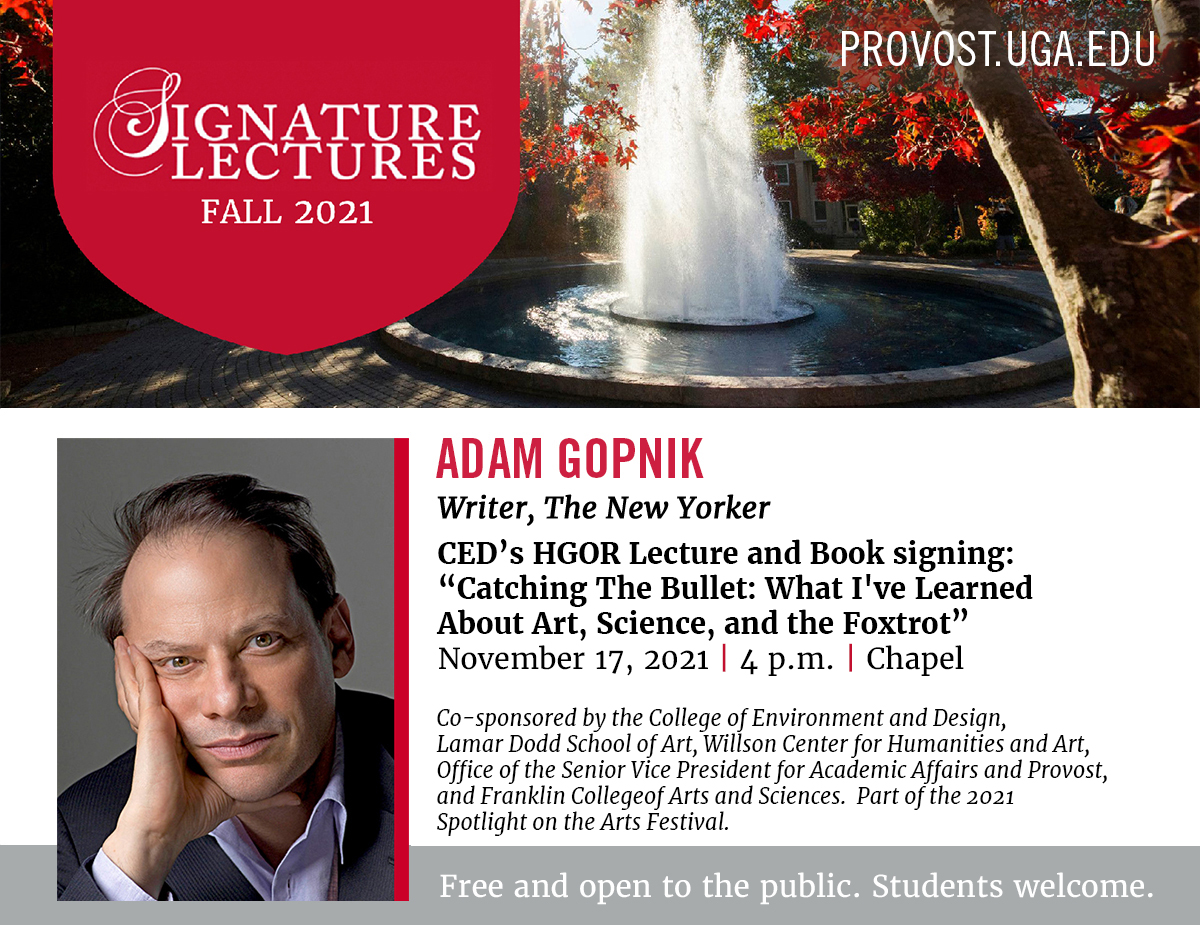 The UGA College of Environment and Design prides itself on teaching at the intersection of art and science, and is therefore pleased to host internationally renowned critic and essayist Adam Gopnik at the UGA Chapel on Wednesday, November 17th at 4:00 p.m. Gopnik will address the compelling need to reaffirm the fundamental relationship between the arts and sciences.  A book signing will follow the lecture, with three of his published works available for purchase: “A Thousand Small Sanities,” “The Table Comes First" and “At the Stranger’s Gate."

Readers will recognize Gopnik as a thirty-year veteran writer of essays, book reviews, reported pieces, humor, and memoirs for The New Yorker magazine. His most recent book, A Thousand Small Sanities: The Moral Adventures of Liberalism, is written as a long letter to his 18-year-old daughter in response to the 2016 presidential election. In addition to being a critic, he is an artist in his own right: a playwright and librettist. Like A.J. Liebling before him, Gopnik sees life’s rich pageant unfolding in numerous ways: from unexpected beauty in a meal with family, or a brilliant cartoon, or a forgotten painting by a little known artist. His writing is widely anthologized and he has won three National Magazine Awards, for essays and for criticism, as well as the George Polk Award for Magazine Reporting. In 2013 Gopnik received France’s medal of Chevalier of the Order of Arts and Letters. He was awarded the Legion d'honneur by the French President in 2021.

Born in Philadelphia and raised in Montreal, Gopnik is a graduate of McGill University, where he studied art history. He completed graduate studies at the Institute of Fine Arts, New York University. Gopnik spent many years in Paris, reporting on details of daily life, art, and food, and now lives with his family in New York City. A brilliantly funny storyteller, he appears often on The Moth Radio Hour and lectures widely.

This lecture is co-sponsored by the Office of the Senior Vice President for Academic Affairs and Provost, the HGOR design firm, Franklin College of Arts and Sciences, Willson Center for Humanities & Art, and the Lamar Dodd School of Art. The lecture is a part of the UGA Fall 2021 Signature Lecture series and 2021 Spotlight on the Arts Festival. The event is free and open to the public. For more information, see the College of Environment and Design’s website (ced.uga.edu) or call the office of Dean Sonia Hirt at 706-542-8113.

Requests for accommodations for those with disabilities should be made as soon as possible but at least 7 days prior to the scheduled lecture. Please contact Sherri Bennett in the Office of Academic Programs at (706)542-0383 or sherri@uga.edu to request accommodations.