We know our CED students and alumni can change the world for the better. Our goal is to encourage and enable more students by giving them the flexibility to make discoveries that effect positive solutions. Students who receive financial support are able to focus much more on their education and take advantage of other opportunities that the University offers.

Help us ensure that hardworking students can succeed in their endeavors by supporting the College of Environment and Design.

EVERY GIFT HAS AN IMPACT↵ 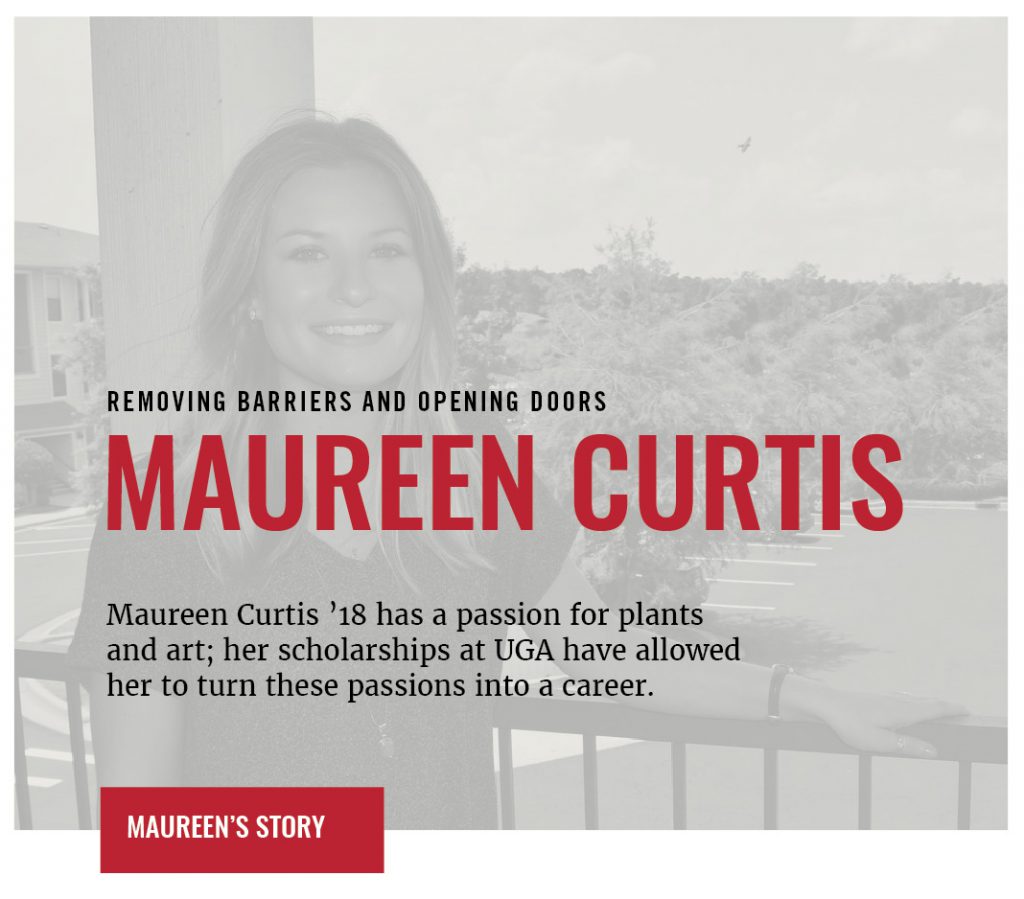 Her UGA Experience StartedLONG BEFORE COLLEGE

Maureen Curtis has been a part of the UGA community her entire life. Born and raised in Athens, her grandfather was a professor of speech pathology at the University and her father and sister both graduated from UGA with English degrees. Attending UGA is a family tradition.

Maureen received the Hope and Zell B. Miller Scholarships all four years at UGA as well as the CED’s prestigious Neel Reid Scholarship, created and funded by Atlanta’s Peachtree Garden Club. Maureen is grateful for the financial support she has received. “The Neel Reid Scholarship has been a blessing to my grandmother.”

In her spare time, Maureen is also a barista at Jittery Joes coffee shop in downtown Athens. She loves working at Jittery Joes, not only for the free coffee during her many late nights at the JSB, but also because she finds that it’s fun to interact with customers.

In addition to a full course load at the college, Maureen has also participated in the college’s Student Ambassador program for the past two years and enjoys reaching out to high school students and teaching them about Landscape Architecture. According to Maureen, the best part of being an Ambassador is getting to see younger students light up when they discover that Landscape Architecture exists. Maureen also serves as the Secretary for the UGA Students for Environmental Action group.

Once Maureen transferred, she had no regrets. “I love being a part of the College of Environment and Design in part because the college is really a small enough community that I feel like I have personal relationships with my professors, advisors, and other students. Pulling all-nighters in the JSB and watching the sun rise in the crit space is definitely a bonding experience!”

Currently, Maureen is living on St. Simons Island, completing her internship with a local firm. After she graduates in December 2017, she plans to leave her hometown and travel. Last summer her work in Yellowstone National Park inspired a love for the American West, to which she plans to return. 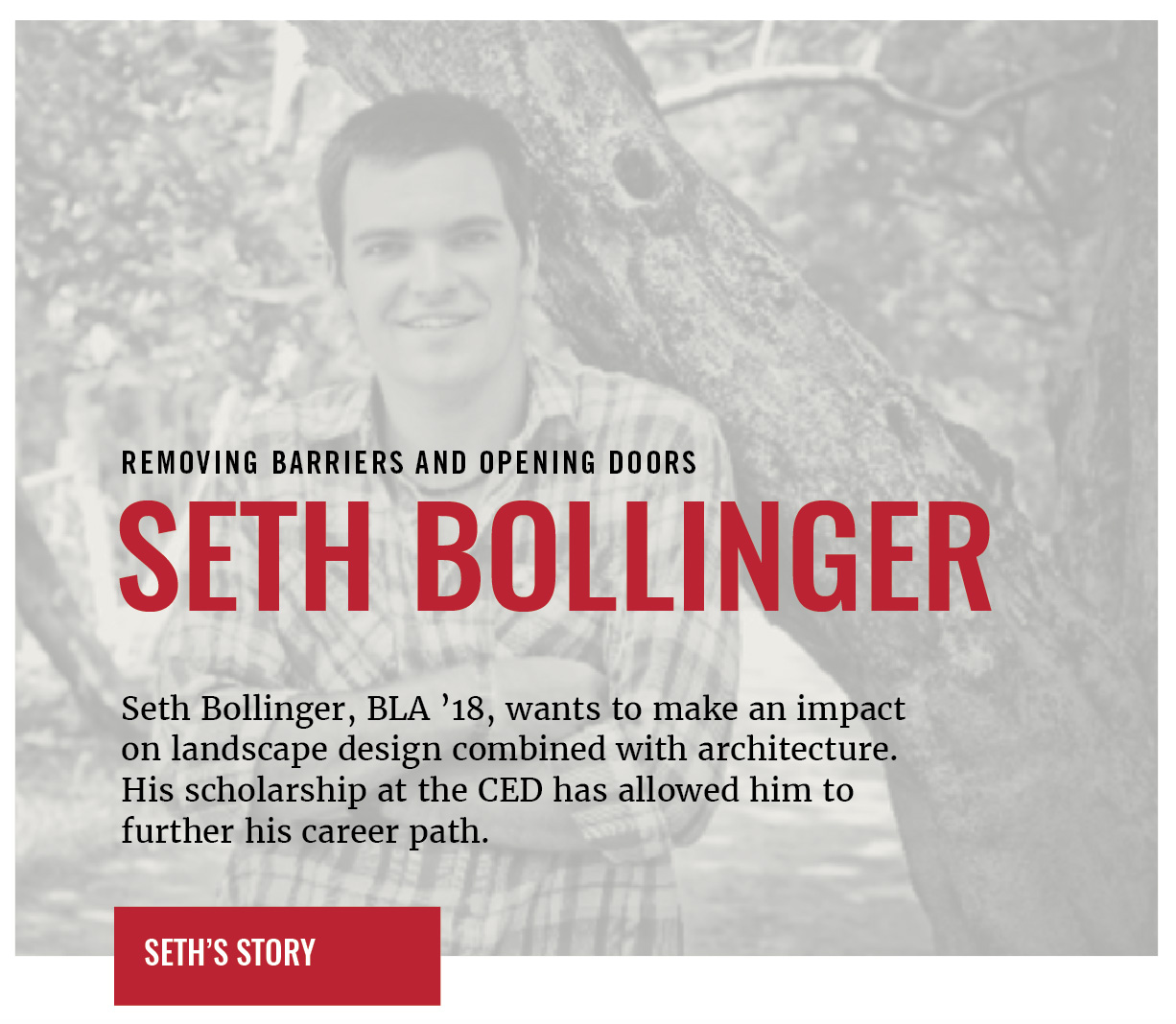 A Love of Music and ConcreteSET HIM ON A UNIQUE PATH

Seth Bollinger, BLA ’18, grew up in Peachtree City, Georgia, with a love for music and guitars. Seth originally wanted to study audio production, and attended Middle Tennessee State University in pursuit of this goal, until a friend told him that working in the music business might have adverse consequences—he might grow tired of playing music. Heeding this warning, Seth switched majors at MTSU to concrete industry management, a course of study decidedly different but equally challenging

While Seth enjoyed his major, he missed being creative. It was this desire to find a major that combined his love for design and construction that led him down a web browsing path to the College of Environment and Design at UGA. As Seth says, “The minute I looked at the CED site and watched the video on what landscape architecture students were doing, I was sold.”

Seth likes that the CED is small enough that he can get to know his classmates—fellow designers he can be around every day in the studio. And he’s made good friends here. More importantly, Seth is a huge fan of how “hands-on” the courses are; students work hard on actual projects rather than simply reading about them in textbooks. He believes in the method of learning throughout the design process and feels that it really suits his skills and interests. It also keeps his creativity awake and in use.

In addition to his studies at the college, Seth is heading up the CED Student Ambassador Program this fall and will continue to work with GSLA, the state’s student chapter of the Society of American Landscape Architects.

Seth received the CED’s prestigious H.B. Owens Scholarship, created in honor of the college’s founder and first dean, Hubert Bond Owens. Seth is grateful for the financial support he received. “The scholarship I received from the CED has allowed me to travel, see things I wouldn’t ordinarily get to see. It has also relieved me of the stress I have with financial obligations and allows me to focus more on school and organizations that will further my career path.”

Currently, Seth is commuting from Athens to Tucker, Georgia each day to complete his internship requirement. He wants to save enough money to complete his Senior Capstone Studio in the summer of 2018. Seth’s long-term educational goal is to attend graduate school in architecture. His dream is to get licensed in both disciplines with hopes of connecting the two fields of work, which he believes share common objectives.

EVERY GIFT HAS AN IMPACT↵