The CED is proud to report that five of its undergraduate Landscape Architecture students have been recognized at ASAI’s 35th Architecture in Perspective Professional and Student Competition. Four students received Student Awards of Distinction, and one received Sergei Tchoban’s “Student Juror Award,” one of the highest honors of the competition.

The winners are rising seniors and studied under Dr. Jessica Fernandez. Student work is to be featured in a museum exhibit in Berlin, Germany, and published in the upcoming Architecture in Perspective catalog.

Typically, adjudicators of the American Society of Architectural Illustrators (ASAI) panel meet in person to pore over professional and student submissions before awarding standout submissions. Adjudicators are from multiple countries, industries, and backgrounds. This year, due to complications surrounding the coronavirus pandemic banning international travel and large gatherings, judges deliberated online.

According to the ASAI website, “While the dialog was different during the video conference the results were the same.” CED students competed against many talented students on a global level, and the CED are pleased that its students pulled out such amazing wins.

Read below each students’ thoughts on their submissions. You can also view the entire 90-piece catalogue of works chosen to represent ASAI this year.

“Morning Light” captures the tense, fragile moment in time preceding sunrise “when everything is covered in a layer of cool warmth,” even if the viewer has never personally experienced such a moment. While the piece is rather dark overall, it also contains an underlying glow and wild texture. Chen hopes the light and textures give an impression of life emerging in tandem with the rising sun. The “life” Chen mentions is seen in the figures in the foreground and background, as well as in the bright plantings and lush greenery which surrounds the central structure. 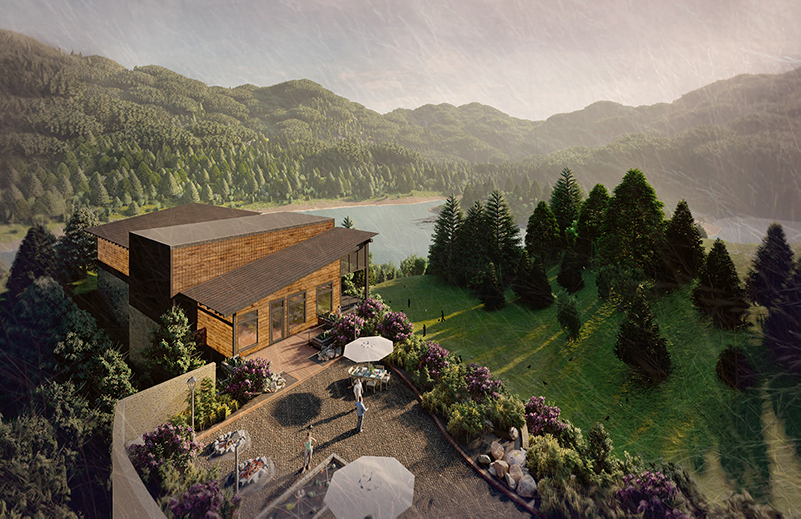 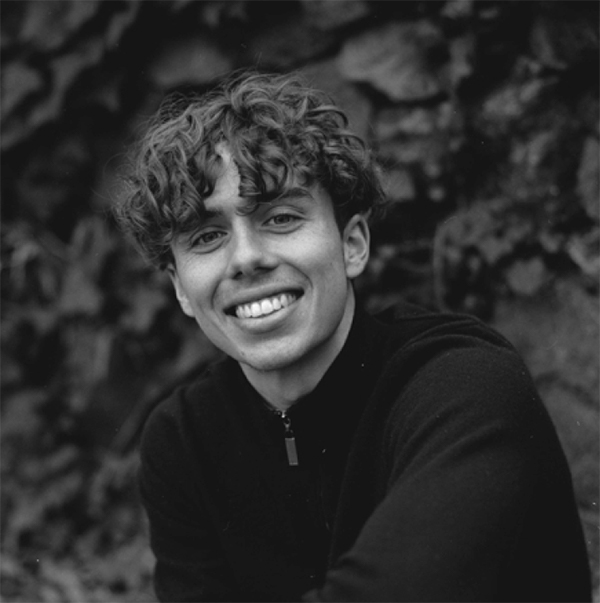 “Driftwood” received one of the highest honors in competition, the "Student Juror Award” by judge Sergei Tchoban. The piece is done in ink, and one of the most difficult design challenges was situating the tree against what is usually associated with arboreal structure and form. The tree is twisted, bowed, bent, and still standing despite its surroundings. Granros reports that communicating the scene’s “unique textures” was also a challenge. Reflective water, gritty sand, rippled clouds, and the skeleton-like tree combine to “capture the tranquil moment, stoic yet so compromised.” 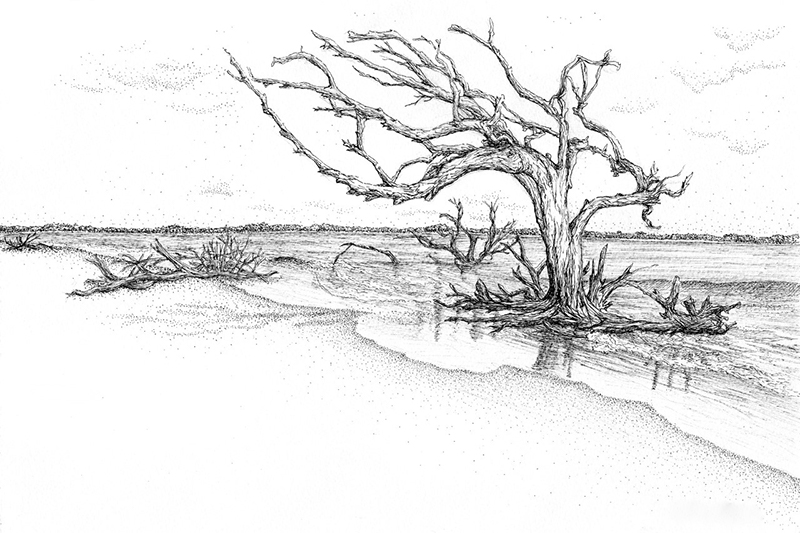 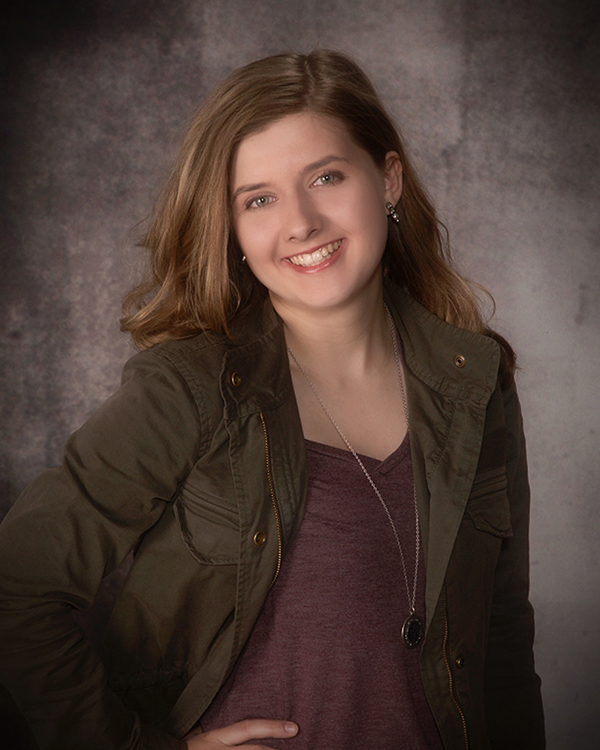 Langston’s rendering, “Ha Long Bay Cliffside Retreat,” took three separate software programs to create. Difficulties in creation aside, the piece accomplishes its mission of presenting viewers with a believable environment. While Ha Long Bay is indeed a real place in Vietnam, the retreat depicted here is completely fabricated yet fully realized. Langston plans to work with a landscape architecture firm using tools utilized in this piece, and has special interest in urban design and creating spaces that serve a variety of communities. 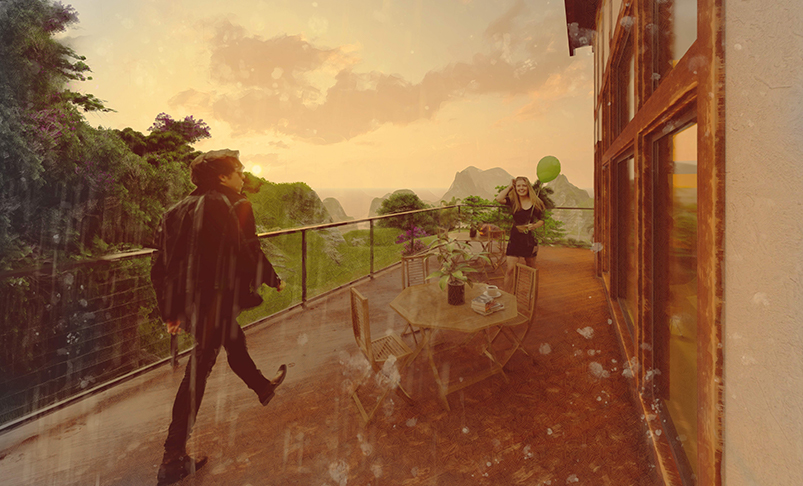 "Light in the Dark" - Annaliese Poliner 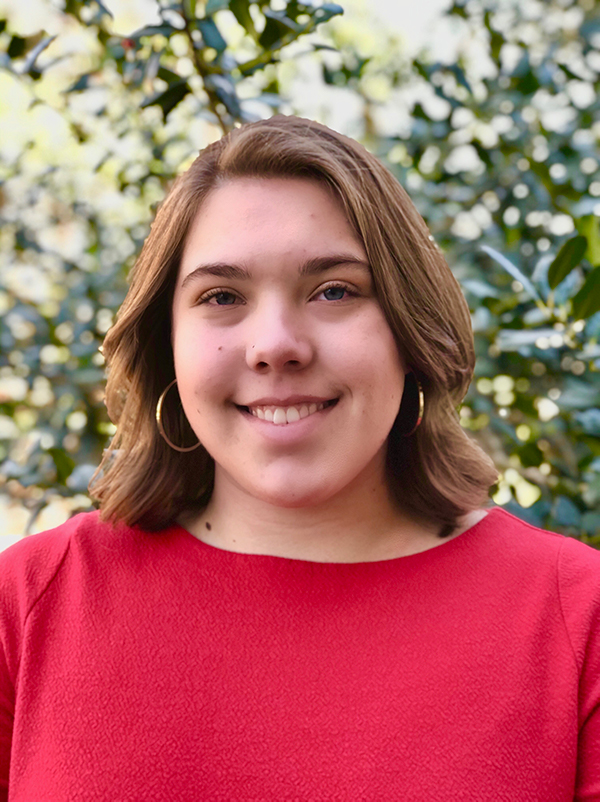 “Light in the Dark” is of a Rocky Mountain cabin in the spring time. The vibrant plantings in the middle ground contrast with the background’s dark mountains and serve as one of the piece’s primary points of emphasis. In the foreground, a couple with their dog cements a comfort often associated with mountain cabins. Poliner, who is especially interested in sustainability and environmental ethics, has interest in working in the public sector to advocate for policies which will benefit our environment after graduating. 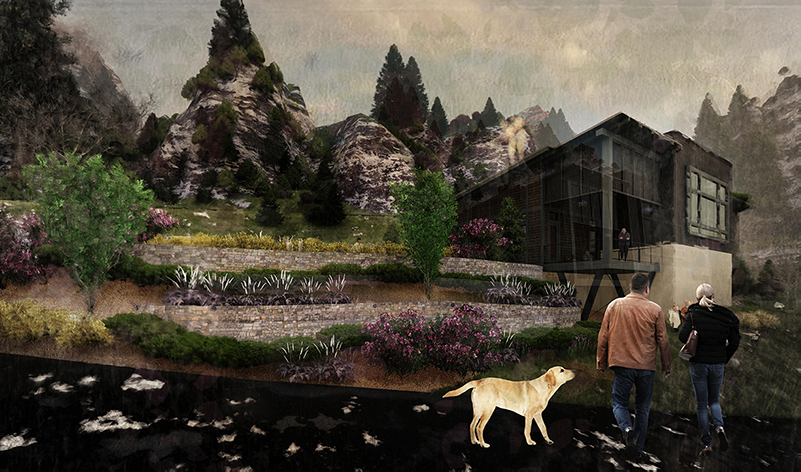 "Serenity in the Shadows" - Perry Taylor 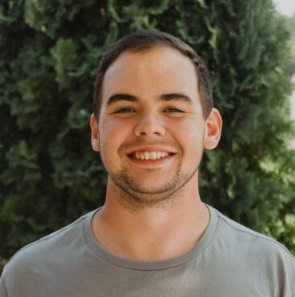 The emotions of “Serenity in the Shadows” come from Taylor’s own experiences while skiing in the west. In it, towering snowy mountains are kissed by a rose glow from the setting sun while trees—all-encompassing yet unoppressive—surround the viewer. According to Taylor the goal of the piece “was to give the viewer a taste of the solitude that I often find […] feelings of quiet contentment often fill my mind when I take a second to look around at my surroundings.” After graduating, Taylor has special interest in designing ski areas, including runs and resorts. 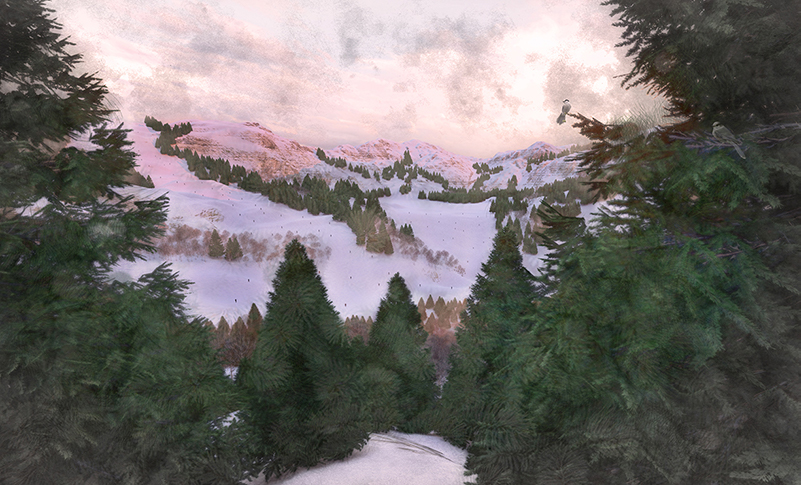 The CED is always proud of its students’ superb work, and this year is no exception. Again, the entire 35th ASAI catalog is available on their website. Consider following us on Facebook, Instagram, Twitter, and LinkedIn for more student work and CED news.