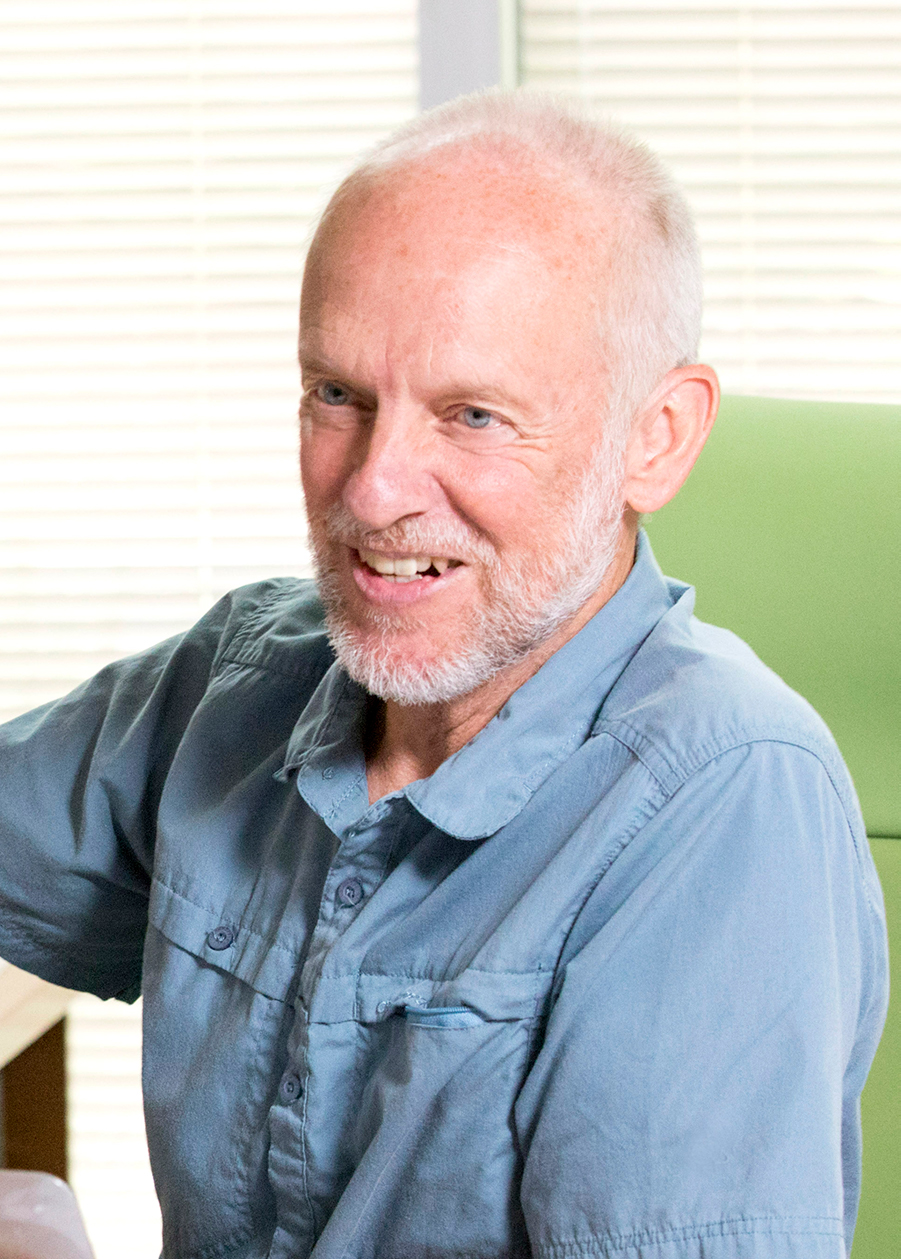 Rado Family Foundation and UGAF Professor of Geodesign Brian Orland is retiring after a 40-year career in education, the last five of which have been with the CED. Orland’s career has largely focused on the applications of digital technology to landscape design, most recently adopting the term “geodesign”— “an emerging research area that integrates multiple disciplines and uses GIS-based analytic and design tools to help explore alternative future scenarios.”

He has inspired students to derive solutions to environmental problems through unconventional methods ranging from digital visualization to gamification. As he leaves the CED, he will continue ongoing work on augmented reality on the coast of Georgia, and increasingly turn his focus to the International Geodesign Collaboration (IGC), a multinational organization of universities focusing on solving environmental issues on a global scale that he co-founded in 2018.

His time in Illinois and Pennsylvania was interspersed with fellowships at Australia’s University of Melbourne and the United Kingdom’s University of Sheffield. He founded labs focusing on digital applications in design and was a Faculty Fellow at the National Center for Supercomputing Applications. He conducted study abroad programs in India, China and at the Udzungwa Mountains National Park in Tanzania. He was inducted as a Fellow of the American Society of Landscape Architects in 1999 and as Fellow of the Council of Educators in Landscape Architecture in 2013.  He was recognized as “Most Admired Educator” by Design Intelligence in 2010. He has received numerous awards including a national American Society of Landscape Architects’ award for his part in creating the “Taj Mahal Cultural Heritage District Development Plan.”

More than 200 publications describe Orland’s wide range of social science approaches and innovative application of computer technologies to develop new ways to engage professionals, communities, and students. His unique methods of engagement include developing software, over time moving from the  visualization of forest pests impacts on urban and landscape environments to engaging communities through virtual and augmented reality experiences that represent the impacts of climate change.

He has introduced “serious games” to accessibly and simply communicate complex systems and concepts. Energy Chickens is a virtual-pet game teaching players to recognize the balance between energy consumption and the toll it takes on the environment. Other serious games have been used to educate communities about the impacts of the shale gas industry. YouARHere, currently in development by Orland’s student Micah Taylor, is an augmented reality app collecting community narratives regarding concerns about climate change.

According to Orland, the highlight of his time at UGA has been focusing on the development of the emerging field of geodesign. The Rado Family Foundation/UGAF Professorship of Geodesign, set up by ERDAS founder and CED alumnus Bruce Rado and his family, was the first professorship of its kind. Through the professorship and the connection afforded between Rado and others in landscape architecture, Geographic Information Systems (GIS), and the global environmental design community, Orland was able to co-create the IGC with his colleagues Carl Steinitz of Harvard University and University College, London, and Tom Fisher of the University of Minnesota.

A gathering of the IGC from early 2020 in the Redlands, California

The IGC’s goal is to foster collaboration between researchers, designers, and GIS experts to educate future leaders and build capacity in geodesign to address solutions to some of the biggest problems facing humanity across the globe. Today, the IGC is made up of 156 universities—including UGA—worldwide. After his retirement from teaching at the CED, Orland plans to spend his time further developing the IGC, its partnerships, and its various projects.

One of the IGC’s many endeavors is investigating the feasibility of the One Trillion Tree Initiative, a program of the World Economic Forum to plant 1,000,000,000,000 trees across the globe to combat climate change. IGC will bring together designers across the globe “to determine the land-use strategies that connect the local actions of planting individual trees to the global goal of containing climate change, while maximizing the potential benefits to environment and people.”

The One Trillion Tree Initiative is just one example of the importance of a worldwide collective of designers and the IGC has big ambitions. The world’s environments are varied and attention must be paid to each region’s specific peoples, climate, geography, wildlife, and plant life. Any attempt to address global problems must start with local actions … the absence of global-scale geodesign provides no guidance to national and local bodies as to how best to design for development as well as conservation, in systems that function independently of political boundaries. IGC’s current goal is to initiate a Global Geodesign.

The IGC was recently featured at Esri’s 2020 User Conference to an audience of 80,000

As he retires from the CED and turns his focus more toward the IGC, Orland and his wife Martha will continue to live in Athens. The CED is thankful for the time Orland has spent educating our students, and we’re looking forward to what he, and his colleagues in the IGC will produce.